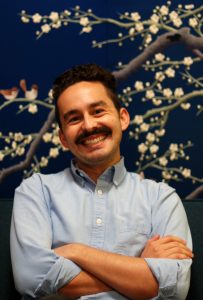 “Since graduating from the M.A. program, I have found that the rigorous coursework to which I was exposed at Columbia has strongly prepared me to distill economic literature into language that is easily digestible to those less familiar with technical mathematical and econometric concepts. Columbia is an institution with a vast network of academics, researchers, and thought leaders who are often willing to engage with curious students.”

He is currently a senior professional staff member on the Select Committee on Economic Disparity and Fairness in Growth, where he conducts research and organizes Congressional hearings on racial and ethnic disparities in labor market outcomes and wealth accumulation, among other general economic indicators.

“Writing my master’s thesis, which focused on the effects of public transportation subsidies on post-transfer wealth distribution in developing countries, likewise provided me with a solid foundation of research and writing skills on which to rely for later projects and literature reviews.”

He most recently was a special assistant to Ambassador Katherine Tai in the Office of the U.S. Trade Representative, a position to which he was appointed after having served as the executive secretary for the same office on the Biden-Harris transition team.

“As someone who has worked almost exclusively in public policy and government since graduation, I have found that the knowledge to which I most commonly refer from the M.A. program is what I learned in the elective courses. While the core curriculum provided a solid base of conceptual and theoretical economics, the elective courses allowed me to learn more about how such ideas are applied to solving real-world problems.”

“The research papers I wrote, including my master’s thesis, were often great writing samples to include with job applications that required them—especially those that explicitly sought applicants with strong technical and writing skills.”

Prior to working in the Biden-Harris Administration, Zamarripa was the associate director for economic policy at the Center for American Progress and an economics fellow at Third Way.

“After graduation, I took more time than most of my colleagues to settle into a path that I found fulfilling. I’ve found that the best way to begin a career in a new or unfamiliar field is simply to start reaching out to people whose work you admire or find interesting. Most of the time, people are more than happy to give advice, provide industry tips, and talk about their research or work. I have met people through LinkedIn, Twitter, and conferences to schedule coffees and calls, and I try my best to respond to those who reach out to me for the same.”

A Los Angeles native, Zamarripa also served as an education volunteer with the Peace Corps in Tanzania.

Stay up to date with our alumni here.